The President of the Republic will send a wreath to the memorial of the victims of Juminda mine battle
24.08.2001 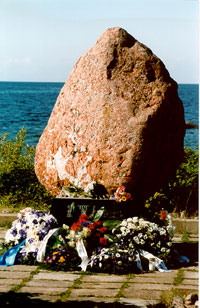 On August 25, a memorial plaque to the victims of the Juminda mine battle that took place at the end of August 1941, will be opened at the end of Cape Juminda. A wreath sent by the President of the Republic will be placed to the memorial to commemorate the victims. The installing of the plaque was supported by the President of the Republics Cultural Foundation.

Also the diplomatic corps has been asked to attend the opening of the memorial plaque on Saturday, August 25, at noon, as well as the veterans of World War II from Estonia, Germany, Finland, and Russia. The plaque will be opened by Navy Captain Roland Leit, Head of the Estonian Navy Association, and the Loksa rural municipality Mayor Madis Praks. The plaque will be consecrated by the Provost of Eastern Harju County Jaanus Jalakas, and Lieutenant-Colonel Tõnis Nõmmik, Chief Chaplain of the Defence Forces. A scientific conference of military history will take place after the ceremony.

The number of victims perished in the Juminda disaster is one of the greatest known in the history of maritime war.


Press Service of the Office of the President
Kadriorg, August 24, 2001